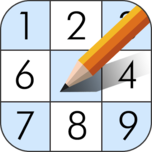 To play our free online Sudoku game, use your mouse and keyboard to fill in the blanks by clicking and placing numbers in the grid. Use the numbers 1-9 in each of the 9 rows, 9 columns, and 3x3 boxes of the Sudoku grid. Use the orange guide to see which numbers you've already used in each row, column, and box. You can change the difficulty level in Sudoku from beginner to intermediate or advanced if you want to solve more difficult puzzles. Try timing yourself to see how fast you can beat a given puzzle.

Focus on a specific part of the puzzle: When solving Sudoku puzzles, players often feel as if they need to solve the entire puzzle from the beginning. But that’s not the case. Any one Sudoku puzzle contains multiple puzzles within it. Start by focusing on a column, row or box. Once you’ve solved that piece of the puzzle, move on to the next part.

Spot the missing numbers: Beneath each puzzle are buttons you use to enter the numbers 1 to 9. Each of these buttons has a small number in the top right corner -- that’s the number of times that the big number already appears on the board. Start with the big numbers that appear most often. For example, if the 7 button has a small 5 in the top right corner, that means there are already five 7s on the board. You can click a 7 on the board to highlight all five 7s in the puzzle. Use this to figure out which rows, columns, and boxes don’t yet have a 7. That makes it easier to place the remaining 7s.

Fill in the Candidates: A “candidate” is a number that could fit in a spot, even though other numbers might fit there too. When solving a puzzle, try filling in empty spots with all the candidates that might fit there. You can do this by clicking the button with the large black dot, and then adding candidates to the spot. The candidates will appear as little numbers. Many beginners don’t bother to use candidates, but that’s a mistake. Candidates are essential when solving difficult puzzles.

Look for Hidden Singles: This one’s pretty simple. Once you’ve filled in all the candidates, look for a candidate that appears only once in a particular row, column, or box. If you find one, that candidate must be in the correct spot, regardless of other candidates in that same spot. Find the Naked Pairs When a box has two spots in which you can enter only the same two candidate numbers (let’s say 6 and 8), that’s a good clue! When that happens, take a look at the other spots in that box. You can eliminate the 6 and 8 from the other spots. You’re still not sure which spot contains the 6 and which contains the 8, but you’ve narrowed it down a lot.

WHAT DO SUDOKU PUZZLE GAMES TEACH YOU?

Sudoku puzzles stimulate your mind and help you practice logical reasoning. While playing this game, you increase your concentration, develop your memory and promote strategic thinking.

BROWSER: CREATE A SHORTCUT FOR QUICK ACCESS TO PLAY SUDOKU